It’s that time of the year again. Retailers have launched their anticipated Christmas adverts.

Retail Gazette rounds up all the retailer’s festive Christmas adverts, from the likes of Sainsbury’s and Asda, to Marks & Spencer.

Sainsbury’s has released its Christmas ad, which has starred This Morning’s Alison Hammond. The ad is narrated by Stephen Fry and focuses on a young pastry chef that tries to impress Hammond’s Countess, with his caramelised biscuit version of the Christmas pudding.

An instrumental version of noughties hit ‘Teenage Dirtbag’ acts as the soundtrack to the fairytale advert, which highlights some of the grocer’s new Taste the Difference Christmas range.

The grocer uses original footage from 2003 film Elf along with some camera trickery to create the ad. Buddy inadvertently joins the Asda team on a trial shift, and samples some of the festive goodies at the store.

Marks and Spencer’s food Christmas advert for this year features Dawn French in her role as the Christmas Fairy, who is joined by Jennifer Saunders.

Saunders plays her new pal Duckie, a tatty dog chew toy. In the new ad, Fairy works her magic and Duckie learns to fly out of his reach as they soar over a Christmas table spread of M&S food.

Lidl’s new Christmas advert features a teddy bear who goes on his journey from humble beginnings to widespread fame. The campaign asks families to donate gifts to the supermarket’s charitable toy bank initiative.

The Lidl Bear first makes his appearance when a father accidentally shrinks his Lidl jumper in the wash, and gives it to his daughter to put on her teddy bear.

Barbour has collaborated with the much-loved children’s character Paddington bear. The includes the original Peggy Fortnum illustration style which has only ever been animated by Barbour.

Barbour’s festive film follows the adventures of Paddington as he comes up with an idea for a thoughtful gift for his neighbour, Mr Curry.

Highlighting Paddington’s kindness and good intentions, it celebrates the joy of giving a very special present that means so much.

Sports Direct has released a trio of 20-second adverts as part of its 2022 Christmas campaign that feature some of sport’s biggest names.

The three adverts are:

• Eau de Footie – Mason Mount and Eric Cantona get up close and personal with a new fragrance that is sure to find its way into stockings this year.
• Family dinner – turkey’s off the menu at this not so typical Christmas dinner with Eric Cantona, Thierry Henry, Emma Hayes, Gabriel Jesus and Clive Tyldesley.
• Directa – Sports Direct’s take on a smart home hub voiced by Eric Cantona also starring West Ham duo, Declan Rice and Jarred Bowen.

Marks & Spencer has unveiled its clothing and home Christmas advert, which focuses on communities and treating people with kindness.

The ad, sound tracked by Harry Styles’ song ‘Treat People with Kindness’, highlights how M&S will provide a one-off donation of £1m to 1,000 different community groups across the UK this Christmas as they struggle to find funds during the cost-of-living crisis.

Debenhams.com has launched its Christmas 2022 TV advert celebrating traditions enjoyed throughout Christmas Day. The advert features Rachel Stevens and Jess Wright as they mark the festive season in style. 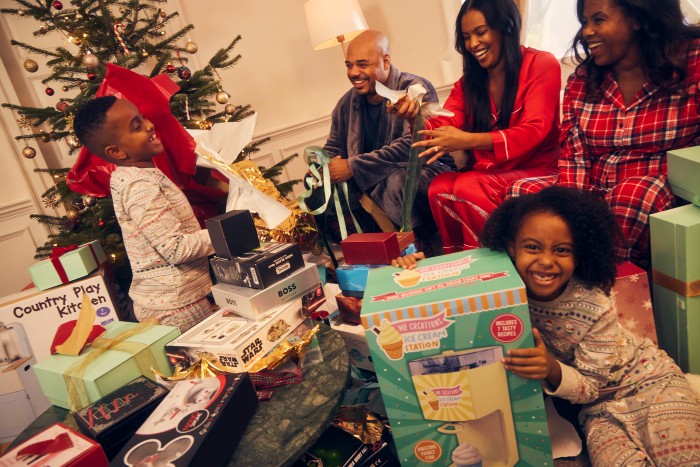 From that early morning rush of opening presents to beginning the marathon of cooking Christmas dinner, families and friends are seen coming together.

TK Maxx’s Christmas advert features a high-fiving heroine dancing through the streets as the whole town turns out in celebration of her present-buying success.

TK Maxx’s ad shows Sam as her father congratulates her for all the presents, she bought and asks how she did it. Sam’s reply is: “Just went to TK Maxx”.

JD Sports’ Christmas campaign – ‘King of the Game’ features actor Cole Wealleans-Watts Christmas shopping with his family. Just as the boredom kicks in, he spots Chunkz (YouTube star & presenter) who’s ushering him to step inside the ‘JD Arcade’.

Cole proceeds to enter a magical JD Arcade dreamworld, where he immediately sees YouTube’s Sidemen, KSI and Tobi Brown, challenging each other on the dance machine.

RnB singer Amaria BB slides out from behind the booming sound system on a motorbike, ready to go head-to-head in a racing game with Mercury Award nominated artist Kojey Radical. As Cole continues, he comes across British rappers Bugzy Malone, Knucks and Arrdee playing on the air hockey table.

Boots’ Christmas advert for 2022, features It’s a Sin star, Lydia West. Titled ‘Joy for All’, the festive advert is set to Hall & Oates hit You Make My Dreams (Come True).

While on the bus, Holly finds a pair of spectacles that when she puts them on, show her a truly magical Christmas. When Christmas morning comes around, Holly sits in glee while watching her loved ones open their presents that all bring them joy, including a Soap & Glory gift set, a Dyson hairdryer and personalised doggy pictures.

Very’s new Christmas advert is sound tracked by Wizzard’s much-loved ‘I Wish It Could Be Christmas Every Day’.

It shows one family’s multiple festive occasions. From putting up decorations in autumn to attending multiple parties, it aims to spotlight how the joy of Christmas comes from being able to celebrate as long as possible.