It’s a cloudy Friday morning, confetti canons are going off, choirs are singing and queues have already formed in South London.

The £9 billion redevelopment has officially opened its doors, welcoming masses of shoppers eager to get inside the iconic south London landmark.

The power station, which was decommissioned back in 1983, is now filled with over 100 different retailers and eateries which span over three levels.

Electric Boulevard, a new high street is also set to open, as well as a paid lift experience in one of the iconic chimneys for views of the capital’s skyline.

But as the cost-of-living crisis hits cash-strapped shoppers and footfall declining across all retail destinations, does London really need a new shopping centre?

The answer is a resounding yes, according to the queue of shoppers eager to enter the site this bleak Friday morning.

They are not alone in their belief. The throng of  retailers that have opened world-beating flagships at Battersea, including Zara, Nike, The Body Shop, Uniqlo, Adidas, Mango and a new-concept M&S Foodhall.

The stores on offer are enough to attract Londoners, who are spoilt for choice with retail destinations such as two Westfields in the east and west of the city as well as the West End, to the new shopping destination.

This includes Nike by Battersea, the sporting giant‘s second Live store in London, a members-only concept, which focuses on localisation and community, tailoring the offer for Nike Members in the south London area. 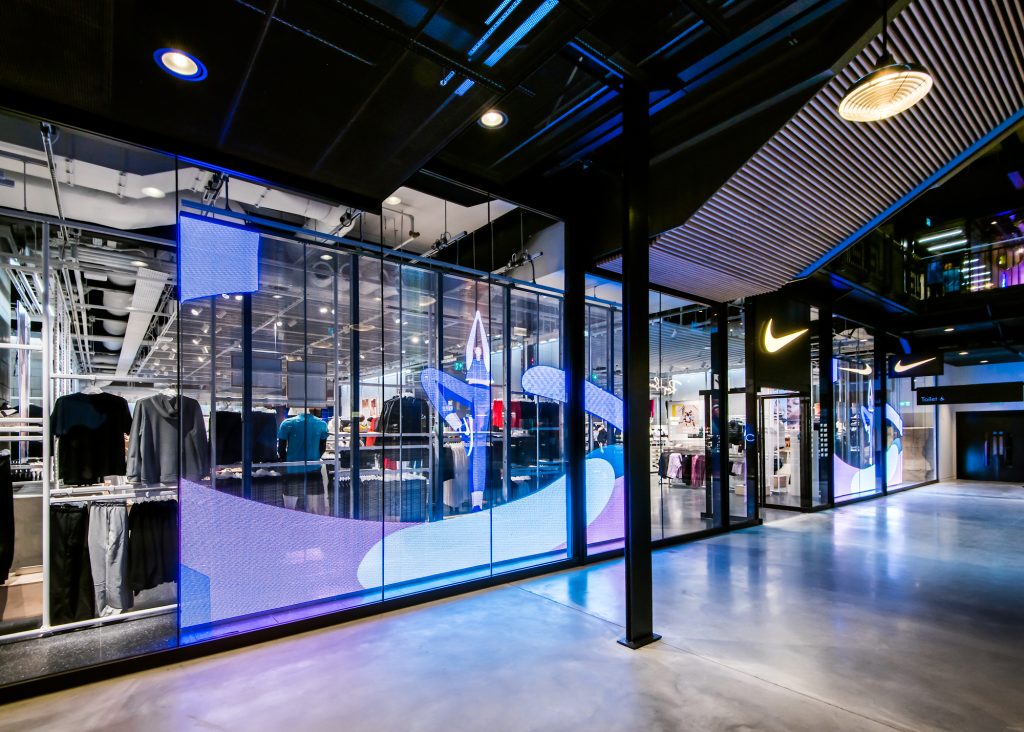 Nike by Battersea is also the first Live store in the UK with a Community Hub, where members can enjoy bi-weekly run clubs, yoga trainings and other workshops led be Nike trainers.

The space will also host activations with local community partners.

The Body Shop has opened its new ‘Workshop’ store format in the development, which focuses on activist heritage. The beauty retailer has been rolling out the Workshop format and it will 60 such formats by 2023.

The Workshop stores are sustainably designed spaces, fitted with a range of upcycled and reclaimed materials such as reclaimed wood and part-recycled plastic storage crates. 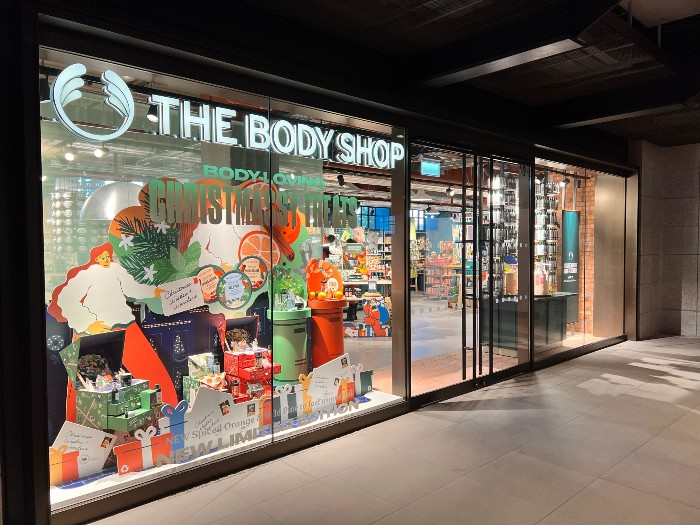 It also features a state-of-the-art Refill Station, part of the retailer’s mission to make refilling empty beauty bottles mainstream. Delivered via a conveyor belt design, customers can purchase a refillable 300ml 100% post-consumer recycled aluminium bottle and fill it up with any of 12 of the brand’s popular shower gels, shampoos, conditioners and hand washes.

The Body Shop managing director of UK and Ireland Maddie Smith said: “Our new Battersea store showcases the best of The Body Shop’s brand values, and marks a significant investment in bringing these to our customers through a physical store presence.”

“This new concept store boldly embraces our activism roots, and recognises that more and more of our customers want to shop refillable, ethical products. We want people to get talking, get inspired and get active in our spaces. We want our customers to have fun playing with our products but also have conversations about issues that affect them, helping us campaign to progress equality.”

A bespoke unit was created over two floors for the fashion retailer with a new revamped store layout blending both of its men’s and womenswear ranges alongside its kidswear offering.

It gives shoppers the ability to repair and customise their Uniqlo items at a repairs hub within the store, where a dedicated seamstress can be found hemming trousers on a sewing machine.

“It’s a privilege to be opening at this iconic London destination, with such a rich heritage and the exciting new retail development,” said Uniqlo UK chief operating officer Alessandro Dudech.

“Battersea Power Station is a very attractive location, as we continue to expand our presence in the UK, an important market for the company worldwide.”

Inditex’s Zara has opened its largest UK store there. The 48,438 sq ft store houses women’s, men’s, children’s fashion and home collections, alongside new lingerie, sportswear, footwear and accessories sections, which is a first for the business. 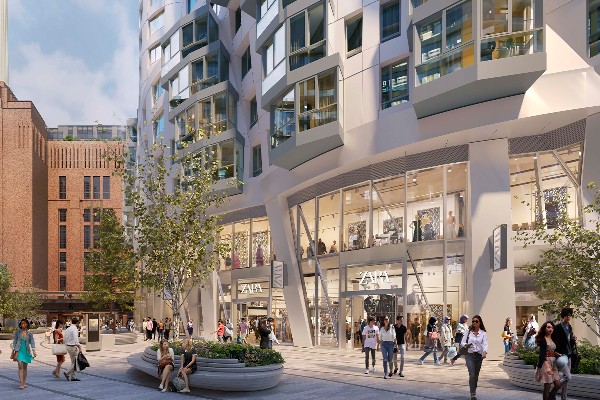 The retailer is certainly talking the store up.

“This is the nicest Inditex store in the world” Inditex’s UK managing director Max Nutz told Drapers. “It is an iconic store, and the building is unique.”

It features the latest digital innovations, including a fitting room reservation service, a two-hour click-and-collect, and the ability to search online for items in the store and to check stock availability.

The store also houses a “Pay&Go” area, allowing shoppers to buy items by scanning them with their mobile phones, an automatic online returns point, a self-checkout area, and a customer cardboard recycling area.

Beauty retailer Space NK has also opened its biggest store to date in the development at 2,100sq ft. 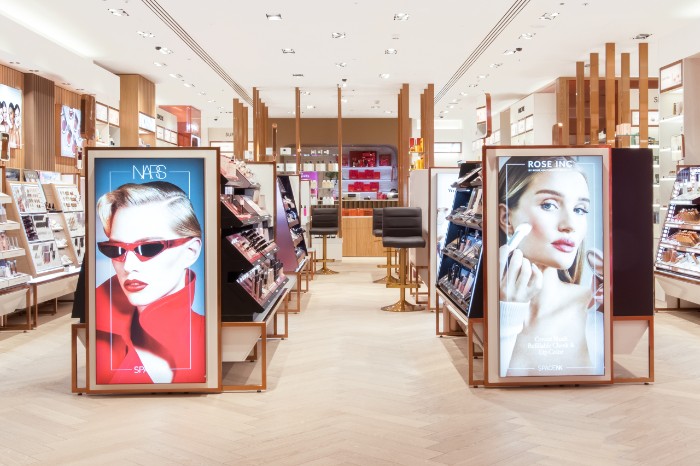 Space NK chief executive Andy Lightfoot says: “The space is unique in our portfolio, featuring numerous experiential zones, encouraging customers to dwell and discover the world’s best beauty brands in a manner that suits them.

“From expertise pods for in-depth consultations to treatment rooms offering facials across a multitude of brands, there is something for everyone in our latest shopping destination.”

Will Battersea Power Station be a success?

There’s no denying that the Battersea Power Station development is impressive.

The revamp and restoration cost £9 billion and it has been well-spent. The development is slick and shiny and it has attracted an enviable lineup of retailers, with more to come.

Despite many arguing that retail is dead, and figures showing the consumer confidence has plummeted, almost every store was full of shoppers eager to do some retail therapy in a new setting with experiential elements at every turn.

The sheer size of the place means there is something for everyone at Battersea Power Station and the centre’s outdoor areas leave plenty of room for exciting activations throughout the festive period and beyond.

A cost-of-living crisis is certainly not the optimal time to be opening a new shopping centre, but if Battersea can maintain the momentum and convince the crowds that visited on opening day to come back, it stands a fighting chance of defying the odds.